The Concise Companion to Art History arranged by Ingo Müller and Gerd Schneider is a work consisting of a projection and a book.

The physical space taken by the archive was no longer justified and the slides were transported to the basement of the Rheinflügel building at Reuterkasserne were they remain to this day.

On closer inspection, it is obvious that the transfer of the archive to the basement consisted of a process of dismantling the framework of the archive and transporting its drawers separately. Since it was unlikely that the archive would be used again, care was not taken to position the drawers in their proper place and the order of the archive was lost. This work is thought to have been undertaken by Mr Müller and Mr Schneider of the Art Academy.

Since access to the archive is forbidden due to safety regulations, a dia list, photographic documentation of the space and the inscription on the drawers are used to search for online images that would re-animate this new order. The found images are presented side by side representing pairs of drawers as Mr Müller and Mr Schneider left them after the relocation.

The inscription on the drawers together with the categorization in the dia list are copied and presented in this publication unmodified and exactly as they are.

The Dewey system of classification used is not altogether consistent as it assigns more than one subject to a specific number. These inconsistencies are due in part to the maintenance of the system through temporary staff.

The projection presents image pairs side by side.

The pairs are digital reconstructions of the physical archive and show the content of one drawer next to another. Pages four and five of this document each show eight pairs of images corresponding to documents that could be found in the drawers of the archive.

The book reproduces the 54 pairs of images accompanied by detailed information of its classification within the archive. 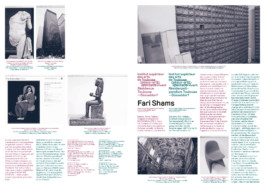